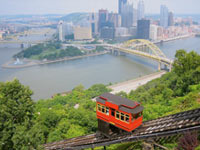 Schedule a Pittsburgh donation pick up. Donate clothes and other household items in Pittsburgh, Pennsylvania. Charities like Vietnam Veterans of America donation pick up service will pick up your donations for free and leave you a tax deduction receipt.

Donationtown.org allows you to schedule an online appointment for a Pittsburgh, Pennsylvania donation pick up. It has never been so convenient to make charitable donations in Pittsburgh, PA until now.

Donating in Pittsburgh is Free and Easy

Although Pittsburgh has officially been in existence as a designated city since 1816, the history of human life in the area dates back 19,000 years with early Native Americans. By 1700, the unique stretch of land where the Allegheny and Monongahala Rivers fork into the Ohio River was predominantly inhabited by the Iroquois, the Lenape, and the Shawnee tribes. Subsequent French and English settlement brought diseases that wiped out much of the Native population, and as well as fighting over who would control the land.

Known from the 1800’s onward as the Iron City, Pittsburg became a major center of industrialization and steel and iron production in early US history. Due to foreign competition, the steel industry sadly collapsed in 1970, throwing much of the population into unemployment.

Since then, Pittsburgh has recovered to the extent that it is now listed by Forbes magazine and Yahoo as “the most livable city in the US.”

Spanning the 90 neighborhoods that comprise the City of Pitttsburgh are countless numbers of amazing thrift stores, including Vietnam Veterans of America and many others. From the East End’s cultural center of Oakland, home of both Andy Warhol and Keith Haring, to the spectacular city views from Mount Washington on the Westside, Pittsburgh offers not only a multiplicity of interesting city sights, tastes and experiences, but also wonderful thrift stores that need your donations. Schedule your Pittsburgh, PA donation today!

Most of the charities in the PA Donation Town directory will come and pick up the following donations:

Where Can I Donate Clothes, Furniture, Books and Other Household Goods in Pittsburgh, Pennsylvania?