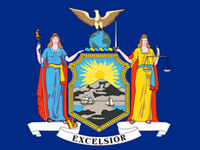 Check out PickUpPlease.org to find out more about their new donation pickup program and how you can donate items in New York City!

Live in other parts of the state? Donation Town can help you schedule a donation pick up in Western New York and the Buffalo area with New Paths Redistribution Center, St. Vincent de Paul, or the Volunteers of America. Simply visit our directory of charities today!

Donating in New York is Free and Easy

Named by and after the Duke of York in the 17th century, New York was first inhabited by the Iroquois, Algonquin and Lenape Native Americans. In 1609, the Dutchman Henry Hudson claimed the land for the Netherlands, and the British took control of the colony in 1664. New York was one of the Thirteen Colonies, and in 1776, after the Revolutionary War, it became an independent state. Only twelve years later, New York became the 11th state in the United States when it ratified the US Constitution.

New York is practically synonymous with New York City, which has not only the largest population of any city in the United States, but is also one of its most popular tourist destinations. New York City is probably best known for Wall Street, Central Park, Ellis Island, the Statue of Liberty, high fashion and culture, and the Twin Towers that fell on September 11, 2001. But there’s so much more to New York than New York City. Because of its role in early US history, it is covered with historical landmarks. Also, most of New York is covered with trees, mountains, lakes, rivers and farms. Adirondack Park is the largest state park in the entire United States, and Hither Hills Park is a popular destination for fishing and camping. Niagara Falls draws people from all over the world.

From Chautauqua County in the west to Clinton County in the North and down to Rockland and Suffolk County in the south, New York is home to a plethora of wonderful charities. Vietnam Veterans of America, Big Brothers Big Sisters and Volunteers of America are only a handful of them. All of these charities are accepting donations, so schedule your New York donation pickup today.

Most of the charities in the New York Donation Town directory will come and pick up the following donations:

Where Can I Donate Clothes, Furniture, Books and Other Household Goods in New York?

Charities in our directory accept your clothing donations and other household goods donations from the following New York counties and cities: