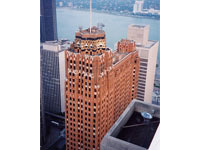 Donate clothes and other household items in Detroit, Michigan. Charities like Vietnam Veterans of America, St. Vincent de Paul, and many more will pick up your donations for free and leave you a tax deduction receipt.

Donationtown.org allows you to schedule an online appointment for a Detroit donation pick up. It has never been so convenient to make charitable donations in Detroit, MI until now.

Donating in Detroit, Michigan is Free and Easy

Back in the days when Detroit was a settlement that was built around Fort Ponchartrain du Detroit, the area was controlled by the French and the fur trade was the main driving force of the local economy. Times changed and so did the leadership, with the British taking over after the French and Indian War of 1760, becoming United States territory in 1796 with the Jay Treaty. That wasn’t the end, though. The British took control of Detroit again during the Siege on Detroit in the War of 1812, but then lost it again to US troops in 1813. Two years later Detroit became an official city.

Detroit is famous for many things. During the Civil War, it was a stopping point on the Underground Railroad, which enabled abolitionists to transport slaves to their freedom in Canada. Not too many years later, Detroit became known as the home of the automobile industry, which in 1896 began humbly with the Henry Ford’s creation of first the first car, and was followed by the establishment of the Ford Motor Company, and eventually Chrysler and GM. Detroit is also the city where Ronald Reagan was nominated for President during the Republican National Convention of 1980.

But perhaps Detroit’s most entertaining legacy is its musical heritage. From John Lee Hooker and the Delta Blues to Barry Gordy’s creation of Motown, the music that emerged from Detroit between the 40s and through the 70s saw an abundance of a distinctly African American sound that crossed over into American popular music and subsequently served to influence countless other musicians. Detroit in the 80s was home to a huge punk rock scene, and in the 90s saw Eminem rise from humble beginnings to hip-hop stardom. Detroit is also known as the birthplace of techno music.

Another interesting fact is that Detroit is the largest city in the US that is home to numerous casino resorts, which provide jobs and tax revenue.

Detroit in recent years has suffered tremendously, however. Within the city, over a third of the population lives below the poverty line. Thankfully, there are a number of wonderful charities that help people through generous donations of clothing, household items, and other necessities. Charities such as Vietnam Veterans of America, the Salvation Army and Big Brothers Big Sisters are always accepting donations, so don’t wait any longer and schedule your Detroit donation pick up now!

Most of the charities in the MI Donation Town directory will come and pick up the following donations:

Where Can I Donate Clothes, Furniture, Books and Other Household Goods in Detroit, Michigan?