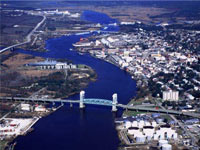 Schedule a free Wilmington donation pick up. Donate clothes and other household items in Wilmington, Delaware. Charities like Vietnam Veterans of America will pick up your donations for free and leave you a tax deduction receipt.

Donationtown.org allows you to schedule online appointments for a Wilmington donation pick up. It has never been so convenient to make charitable donations in Wilmington, DE until now.

Donating in Wilmington, Delaware is Free and Easy

The area that is now known as Wilmington was first colonized by Swedish settlers in 1638 with the establishment of Fort Christina on the Christina River. Ruled under Swedish law from 1643, Fort Christina was the headquaters for New Sweden for ten years, after which point the Dutchman Johan Rising took over and govered until a Dutch fleet took control of the Swedish forts, thereby ending Swedish rule. Within only a few years, British forces took control after a series of wars with the Dutch, and British rule lasted until the Revolutionary War, prior to which the settlement was named Wilminton by King George II.

Wilmington grew exponentially during the Civil War due to the fact that it was a major producer and supplier of war related necessities, such as ships, gunpowder, railraod cars, leather, carriages, and shoes. The two World Wars stimulated the growth of the war industry even farther, and other industries such as clothing, leather goods and automobiles also took hold and began to thrive during this time.

Wilmington is now a center for the credit card, insurance and retail banking industries. It is also known for having a population that is multiculturally diverse, and large and popular festivals, such as the Italian Festival in Wilmington’s Little Italy, and a Greek Festival. Music festivals also play a prominent role in the city’s cultural life, with the Clifford Brown Jazz Festival and a festival to celebrate Bob Marley, who once lived in Wilmington.

21% of Wilmington’s population lives below the poverty line, making it imperative that people donate to the charities that will help those who need assistance. Vietnam Veterans of America is among some of the wonderful charities that are always accepting donations. Schedule your online Wilmington, Delaware donation pickup today. Your donations will go a long way towards helping those who truly need it.

Most of the charities in the DE Donation Town directory will come and pick up the following donations:

Where DEn I Donate Clothes, Furniture, Books and Other Household Goods in Wilmington, Delaware?